MIGHTY PENGUINS SLED HOCKEY, INC. ANNOUNCES CHANGES
TO BOARD OF DIRECTORS FOR 2022-2023 SEASON

Erica Burg, the current Treasurer, is stepping down from the Board after serving five years in the position. Erica has been a big supporter of the Mighty Pens (MP) in many ways including providing photography services and bringing new members to the Board like current Operations Manager/Coach James Michael and Justin Hewitt, a respected detective with the Cranberry Township police department. In addition, she brought numerous volunteers to help at MP practices and events whose talents included videography and fundraising as well as bringing other hockey teams to participate in team scrimmages/fundraising events with MP athletes.

Martha Martin, current Secretary, is also stepping down from the Board after four years. She has supported the organization in many other ways such as introducing volunteers and making connections for jerseys and grant opportunities.

We thank all of our board members for their important service to the organization. Other current and oncoming Board members include: Dan McCoy, Jim Southworth and, effective July 1, 2022, Tod Herchenroether, and Leigh Anne Kustra. 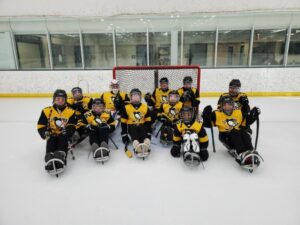 The Mighty Penguins Junior team enjoyed a great season!  The team has been dedicated to attending scheduled practices and their hard work shows on the ice.  We are grateful to have parents and coaches who made the commitment to attend several tournaments.  Sled hockey provides our players with exciting opportunities to travel.  Tournaments are a fun team bonding experience while providing the opportunity to see new cities along the way.

Players from two teams combined to travel and worked together to clench first place in Grand Rapids, Michigan at the 2022 Griff’s Sled Hockey Classic!  Both junior teams went on to play well at our final competition of the season. The 2022 USA Hockey Disabled Festival was held on home ice in Pittsburgh. It was amazing for our players to experience the support of our community while showcasing our city.

The Mighty Penguins Junior Gold and Junior Black teams have been enjoying a busy tournament season.  Both teams began their season at our home tournament in October.  So far this season they traveled to Wooster, Ohio to compete and played through the semi-finals.  Keeping a busy schedule, the teams were off to Columbus, Ohio to compete at the Ohio Sled Invitational in January and then to Youngstown, Ohio in February, and will be on their way to Grand Rapids, Michigan in March. 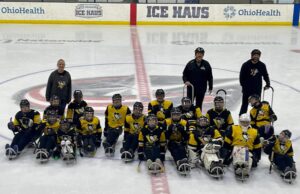 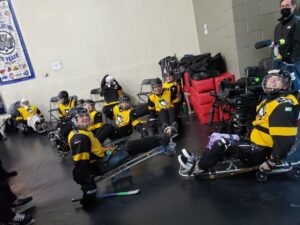 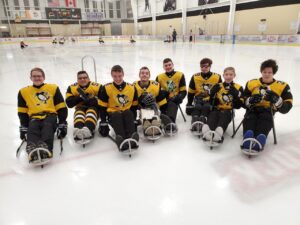 Both teams are enjoying a great travel season.  We are proud to see the growth and development of all of junior sled hockey athletes as they accomplish great things on the ice.  Good luck Mighty Penguins!

With the support of the Penguins, the Mighty Penguins Senior and Adult Black teams traveled to New Jersey.  The teams enjoyed meeting up with friends from teams across the country and especially enjoyed the intense competition.  We are very proud of the accomplishments of both participating teams. Our Senior team won the Championship in their division. Congratulations Seniors, 2021 USA Hockey Sled Classic Tier II Champions!  Our Adult Black won second place in their division.  Congratulations Adult Black, 2021 USA Hockey Sled Classic Tier IV – second place!  We look forward to returning in 2022!

We are back on the ice and ready for a fun, competitive sled hockey season!  After what seems like forever, we are looking forward to hosting our long-awaited Sled Face-Off Tournament beginning Saturday, October 16 and 17 on our home ice at the UPMC Lemieux Sports Complex in Cranberry Township.  We are excited for the arrival of our friends who are traveling to meet us on the ice.

Our Sled Face-Off Tournament has been a popular tournament for youth sled hockey players in prior years.  This year, we are pleased to announce the addition of adult competition.  The Cincinnati Icebreakers adult team will face-off against our Mighty Penguins Adult Gold.  Additionally, we have several youth sled hockey teams competing in our Junior A and Junior B Divisions.  Join us for a fun weekend of sled hockey!

Best of luck to all of the sled hockey teams!  We are happy to welcome you back to Pittsburgh!

The Mighty Penguins Adult Black team kicked off our first competition in nearly two seasons!  The team traveled to Columbus, Ohio on September 16 and 17 for competitive adult league games.   Adult Black had a great time together and enjoyed socializing with sled hockey friends again.  The competition was intense and exciting.  It’s great to enjoy travel and competition again. Let’s go Pen’s!!!

Each Junior Team’s Coach nominates one player for the Jennifer Kryger Spirit Award at the Grand Rapids Tournament. Sled hockey players who display similar character qualities on and off the ice as Jennifer, a previous Sled Wing’s player, did in her short life.

Jennifer was encouraging to her teammates and befriended others. She had a positive outlook on life, and a contagious laughter that brought smiles to many. Jennifer put a lot of heart in her game and as a sled hockey player, never gave up.

Our coaches nominated our newest player, Brynn, attending her first tournament. She was diagnosed in May with Hereditary Spastic Paraparesis a progressive degenerative spinal cord disorder. This year’s winner is Brynn!!

Brynn is new to the Mighty Penguins, she has instantly became a part of our team with her determination, eagerness to learn the sport, and genuine happiness.   Prior to playing sled hockey, Brynn was an avid softball player, playing on a travel team.  Bryn has Hereditary Spastic Paraparesis a progressive degenerative spinal cord disorder, which she was officially diagnosed with this past May.  Her symptoms quickly came to a point that she could no longer play Travel Softball or run and play with her friends without falling.  Brynn loved being part of a team and the competition of sports, she didn’t know how she would fill that part of her life and then she was introduced to sled hockey by her doctor.  The moment he showed her the video of sled hockey, Brynn knew she found her new sport.  Since Brynn first got into a sled, she has been committed to the sport, creating new friendships with her teammates and honing her skills.  She has joined us in every practice, our strength training program, and 2 sled hockey day camps all in less than 2 months of playing sled hockey.  She is looking forward to her first tournament in Grand Rapids.

Brynn always has a smile on her face, approaches everything positively and brings joy to those around her.   Brynn’s mom says that even though Brynn’s life has changed a lot in a very short period of time, she has always stayed positive.  Brynn’s always had a bright smile and her mom was afraid she would lose it through all of this but she hasn’t.

Brynn is very deserving of this reward, she processes many of the same characteristics of Jennifer Kryger and brings positivity to those around her.

Congratulations on the well deserved award celebrating your amazing spirit! 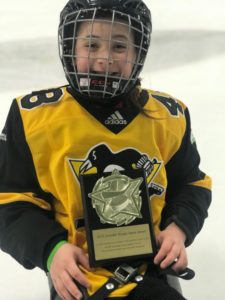 The CUP was named in honor of a physical therapist that volunteered with the Mighty Penguins through  LEND Pittsburgh. Lauren passed away January 2018 from Acute Myeloid Leukemia.  She had an amazing spirit and is dearly missed by her husband, parents, family, friends, co-workers and patients.  Lauren will always be a special part of the Mighty Penguins. https://www.crowdrise.com/o/en/campaign/laurens-legacy-gift/mightypenguins

We look forward to the Pediatric Therapy centers sharing with their patients all about the Mighty Pens. Therapists are our best recruiters! We thank them for all they do for our players! 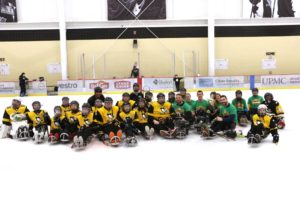 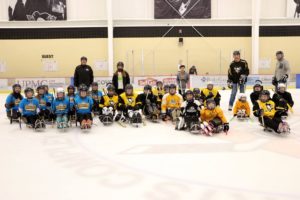 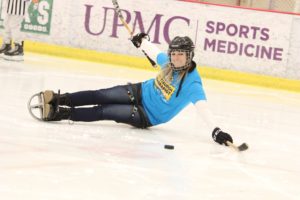 Thanks to everyone who supported our 9 Mighty Penguins raising over $4000! 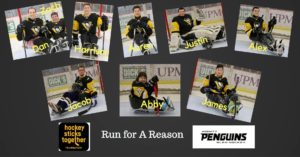 As part of the DICK’S Sporting Goods Pittsburgh Marathon, our players chose to “Run for a Reason” selecting Hockey Sticks Together.  It is a foundation that was set up with a partnership of the Penguins Foundation and supports all special hockey programs including our sled hockey team.  All the funds raised by our players were directly given to the Mighty Penguins.  We plan to do it again next year! 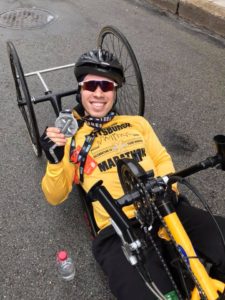 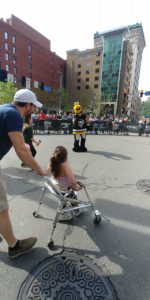 Start of the 5K 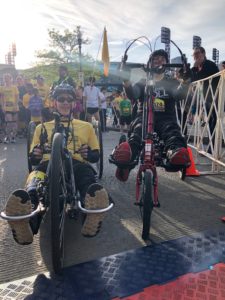 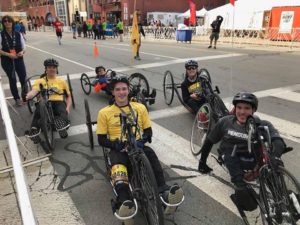 The Mighty Penguins hosted our first ever Girls Only event on the ice at UPMC Lemieux Sports Complex!  We had new players, current players, girl scouts and Chatham University Women’s Ice Hockey team. The Mighty Penguins wanted to follow the World Girls Hockey Weekend initiative and try it our way….on sleds!

We did all of the above and more!  Kelsey DiClaudio, Mighty Penguin and Team USA Women’s player spoke to the participants to share her story and passion for hockey.  The Chatham University Women’s Ice Hockey team led the on-ice portion on skates and the players also tried out our sleds, too.  Everyone enjoyed learning more about the sport of sled hockey.  We are excited to add more girls and women to our rosters! #GirlsRule